Created by Sheri Elwood (Lucifer, Call Me Fitz), Moonshine is back for Season 2 and picks up just a few days after Season 1 left off. Adorably A-Type Lidia (Jennifer Finnigan, Salvation) will embark on a heart-thumping but disastrous romance with outlaw biker, Gale, played by beloved Canadian star Allan Hawco (Republic of Doyle, Tom Clancy's Jack Ryan) and -- with the very best of best intentions -- become embroiled in a dangerous money-laundering scheme. The new season will dig into the unexpected pregnancy of fave unhinged sister Rhian (Anastasia Phillips); see commitment-phobe Nora (Emma Hunter) struggle as her career takes a surprising turn; and follow the youngest Finley-Cullen, Sammy (Alex Nunez), as he searches for his biological parents, with lovably clueless Ryan (Tom Stevens) along for the ride. With four weeks of summer left, it's just enough time for the Finley-Cullens to inspire flash mob insanity, primal screaming, dirty bingo, snow crab-jacking, pending bankruptcy and a looming family turf war that threatens to annihilate the Moonshine once and for all. Buckle up... 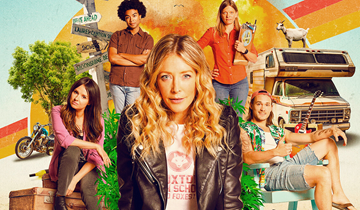