A suspicious death and a bequest with surprising strings attached are the starting point for Nuit blanche, a family saga with a detective story slant, imagined by Julie Hivon.

The story unfolds along two parallel tracks with a 30-year interval. Back in the 1970s, we see a young Louise who is crazy in love with Vincent, a rebellious activist at Bertrand's side. A decisive encounter with Aidrian, the man who will later become her muse, opens the door for Louise to become a top model and provide a more stable financial footing for her family. Along the way, often by necessity but also by choice, Louise will have to give up some of her political ideals and make some difficult sacrifices.

Today, Louise has become a formidable businesswoman at the head of Nocturne, her perfume empire that owes much of its success to her top-selling perfume Nuit Blanche. Everything changes when, at an evening reception celebrating her success, Louise dies alone in her garden. Is it murder or an accident? 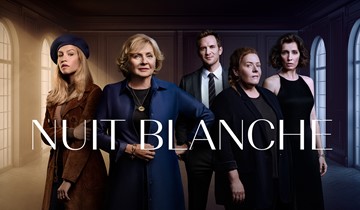