The series portrays the romantic yet tumultuous early years of the reign of Queen Victoria, played by Jenna Coleman. A legendary figure, crowned over 100 years before the current queen Elizabeth II, the young princess is only 18 when she ascends to the throne. But she is determined to prove to the world that she is capable of fulfilling her exalted duties. Her blend of strong will and ambition make her many enemies, however. Prime Minister Melbourne (Rufus Sewell) is the only one she can truly count on, but he has to fade out of the picture when Prince Albert of Saxe-Cobourg (Tom Hughes), the royal suitor chosen by Victoria's uncle, appears on the scene.

Variety: "Production design, costumes and locations all provide feasts for the eyes in this eight-part series..."

Daily Telegraph: "Coleman totally convinced as the pint-sized powerhouse, conveying Victoria's girlish volubility, vulnerability and iron will all at once... You'll be swept away". 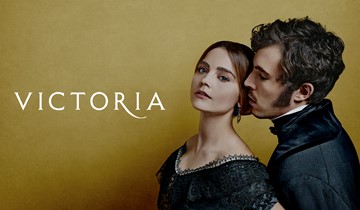