Larry, 62, is a former undercover cop whose reputation was tarnished by a corruption scandal. His guilt was never established; but, ostracized and harassed, he decides to leave the force. Still, he's haunted by a sense of failure. Resigned to working as a security guard, he lives with the love of his life, France, 64, in a culturally mixed part of Montreal.

One day when stepping out with their grandson, Larry and France are caught in the crossfire between two rival gangs. Larry manages to shield the child, but France takes a bullet in the back. The prognosis is grim: she'll never walk again. Larry, encouraged to adjust to his new role as her aide, is devastated. His world is falling apart. He feels responsible and his guilt is so overwhelming, he can barely look her in the eye.

Instead of facing the music, he decides to launch his own investigation. He starts by buddying up to his Jamaican neighbour, whose teenaged daughter has connections with one of the gangs. Aided by Lisa, a friend on the force, he soon butts heads with lead investigator Romain Félix, a young Haitian whose star is on the rise. Blinded by his quest, Larry will go so far as to endanger the very lives of those he loves. 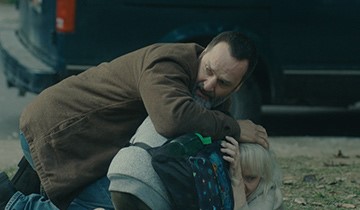