Sauvetage ultime is a documentary series where every second counts – a unique inside look at the work of the Sûreté du Québec’s helicopter search and rescue team. The squad agreed to give us exclusive access to film their daily work and rescue operations. SQ provincial police rescuers come to the aid of over 1,600 people a year; that’s about five people a day. Quebec has vast wilderness areas where people can easily get lost and find themselves in a situation where their survival is at stake. The SQ search and rescue team is a relatively unknown emergency service. Its job is to search for people who have disappeared in wooded or urban areas, or who may be in distress, and to perform rescues in sometimes extreme conditions. All searches are considered to be responses to emergency situations, and operations must be conducted quickly because it could be a matter of life and death. It’s noteworthy that only one police officer out of 600 meets the physical and psychological requirements to be allowed to perform this high-risk work. The team currently consists of four serving members, but is planning to expand. For several months, our film crew was allowed to document the squad’s first recruitment competition, which was open to the SQ’s 8,000 officers. Sauvetage ultime is a series that runs on stress; the tension of the rescuers and the fear and anxiety of those they rescue are continually palpable on screen. 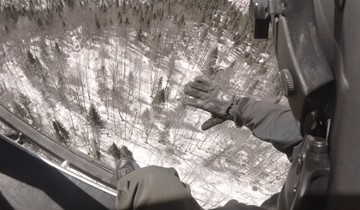