What’s in a name? There’s so much to say about it, and it says so much about the person. That’s the idea behind this new, hugely entertaining one-hour variety show. Hosted by Stephane Bellavance, Comment tu t’appelles? comes to ICI TÉLÉ in Spring 2021.
Each week, Stephane is joined on a large studio set by comedians Eve Côté and Kevin Raphaël as well as an energetic house band, and welcomes celebs who share the same first name.
Each episode focuses on two first names, and Stephane embarks on a new and fascinating conversation about each one, interspersed with various segments delving into cultural, historical, unusual and amusing aspects relative to them. Reports and streeter segments give us a sense of what each name means to the general public, and introduce us to inspiring people who share it. The team also explores cities, streets and towns that honour the name, and the band puts their encyclopedic knowledge of popular songs to good use by playing one or more hits that celebrate it – sometimes joined by a namesake performer! In short, they pull out all the stops to showcase the featured names’ many facets with originality and authenticity.
Will the guest celebs see themselves in their name? How about you watching at home? 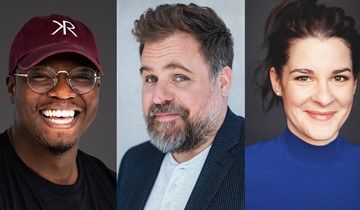