CHARLES 50 YEARS A PRINCE
Fifty years ago in Caernarfon, Prince Charles embarked on a unique relationship with a country that has shaped his life and work. While acknowledging a sometimes troubled and turbulent history, this will be a celebration of Wales through the eyes of a Prince who has made the role his own.f the royal rift that led to Harry and Meghan's departure from the monarchy.

HARRY & WILLIAM: WHAT WENT WRONG?
The real causes of the royal rift that led to Harry and Meghan's departure from the monarchy. 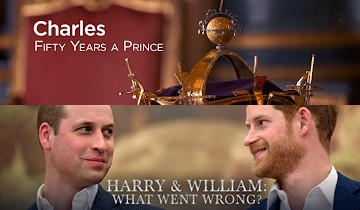