As the situation with Covid-19 evolves, CBC and its production partners have been working closely to resume production on a number of titles. The health and safety of cast, crew and everyone involved is of the utmost importance and all public health guidelines are strictly observed and adhered to. We will continue to update this space as more of your favourite titles resume filming.

September 23, 2020
Principal photography has begun on the fifth season of CBC's original comedy WORKIN' MOMS (10x30), produced by Wolf + Rabbit Entertainment. The series is created by Catherine Reitman (Black-ish, It's Always Sunny in Philadelphia), who serves as showrunner and executive producer and stars as Kate Foster. WORKIN' MOMS looks at the polarizing and unexpected realities of the lives of a group of friends—all working moms—and their partners, as they've adjusted to life as parents. They might not be able to have it all, but they're sure as hell going to try. Production will continue in and around Toronto through late November for a winter 2021 premiere on CBC and the free CBC Gem streaming service. 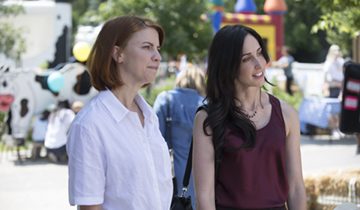 Season three will provide audiences with two additional one-hour episodes (10x60) and is scheduled to debut on CBC and the free CBC Gem streaming service in Winter 2021.

August 11, 2020
Shaftsbury announced that production has begun on the top rated Canadian series MURDOCH MYSTERIES. Season 14 is shooting in Toronto, and will feature 11 new one-hour episodes, set to premiere on CBC TV and CBC Gem Streaming service winter of 2021.